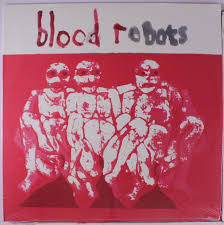 Originally released on Fuck Off records in 1979 this album is finally unleashed for the whole world to hear. Super cool postpunk sounds from the streets of west London circa late 70’s. They were somehow associated with Hawkwind but I can’t remeber where I read that at the moment. This LP contains some serious raw solid state guitar tone, love the guitar sounds. It’s the aesthetic that makes you love this. It’s experimental but still has catchy songs and it’s all played sloppily but just good enough and with conviction. It clearly belongs to the postpunk era but still delivers both rock’n’roll and punk moves and then adds some freaky synth sounds on top. Another thing that I like about it is that it’s totally free from reaggae and funk influences which a lot of bands from this time got into (read Gang of Four, Slits). Sure they do that ska guitar at times but always on the punk side of life. The inner sleeve tell the legend of the Androids of Mu. Great! Sleeve is really thick cardboard in black/white/red. Also includes lyric sheet with their amazing lyrics. How’s this one for starters: “drag queen crazy scene what does it mean?”. Fun, clever and good at the same time! (Martin)