THE FIGURES OF LIGHT

It was while reading an issueof the Brittish music magazine Wire some years ago I stumbled onto a review ofthe first Figuers Of Light 7” reissue from Norton. As I remember, it wasdescribed with references to primitive, early Modern Lovers, early Half Japaneseand proto punk. I thought it sounded really cool. Fortunately my brother hadthe 7” and it sounded quite like the description! It’s not often these daysyou’ll hear something good and unknown from that era. Raw and primitive protopunk from 1972, totally unheard of. Then some time later a fullength came withboth old and new recordings (also on Norton) and suprisingly it sounded great!We gave it a nice review and a while later got a thank you mail from the singerWheeler Dixon. Cool I thought and figured I might as well ask him somequestions while I had him on the line. He said he wouldn’t mind answering myquestions so I mailed him a bunch and here it goes: 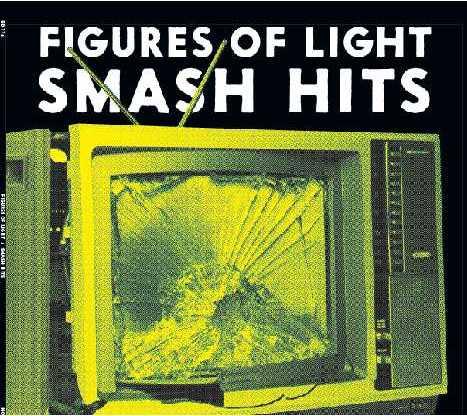 Ok, first of all I’d like to know how you got into music and when itfirst seemed really important in your life.

I got into music in my early years, with many yearsof piano and also a stint at the American Boychoir in Princeton, NJ as a youngboy; ages 9-11. I attended a lot of classical and jazz performances in the NYCarea; the Metropolitan Opera, the Blue Note jazz club, and gradually, as rockand roll took off in the mid 1950s, I picked up on that. The major radiostation was WABC, New York, which played a very adventurous mix of top 40 tunesfor the era, and then, of course, the British Invasion happened in 1964.

Were most teens into music backthen?

Yes, I was into pop, even as a young boy, and sowere my friends.

Did you hear about most rock’n’rollfrom the radio or from records?

Rock came to first through AM radio, when Iwas about five and six, and then records, when I got a few years older.

Did you get to see any of the bands live?

Listingthe bands I DIDN’T see would be a shorter list that the bands I did see!Artists and bands I saw live include Little Richard, Chuck Berry, The VelvetUnderground at least 50 times, The Rolling Stones in 1964 when they were stillgood and Brian Jones was alive, The Kinks, Chuck Berry, The Count Five, TheMusic Machine, The Troggs, The Beatles, The Dave Clark Five, Jimi Hendrix,Janis Joplin, Frank Zappa, The Who, Led Zeppelin, and later Television, TalkingHeads, The Ramones about 50 times. I first saw them in 1974, and was convincedthey would never get a record deal. Too many bands to mention. Oh, and JerryLee Lewis, of course, and Elvis.

Where did you grow up?

I grew up in New Brunswick, New Jersey, and had avery happy childhood. I was interested in filmmaking from the age of six, andhave made many, many films.

Was it alot different to come from NJ as opposed to New York in terms of culture orwere you part of the New york scene?

Not really. New Brunswick NJ is about 40 miles fromNYC, and so the radio signals carried well, and I would jump on the bus ($2round trip until 1970) and spend days there with friends and associates. I wasa part of the NYC scene from about 1964 on, as you can see from the interviewlink I sent you; by 1966, I was practically living there, and coming back toNew Jersey only to finish up high school, sleeping on the bus, doing homeworkin study hall, the usual teen stuff. But I was very involved in the New Yorkunderground film scene in the 1960s from 1966 on, and made numerous filmsduring the period. 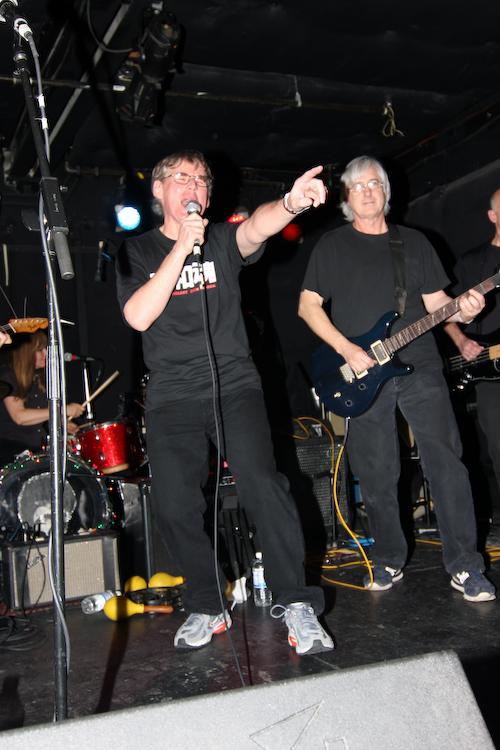 It was really interesting to read about your films! Is there any way to seeany of them today?

No, they are all in the permanent collection of theMuseum of Modern Art in New York, and are not distributed to the public.

I read in the aforementioned interview that you made some films at theFactory and hung out with that crowd (Gerard Malanga etc.). Were you friendswith the Velvet Underground at all or were they just an inspiration?

I saw the Velvets many times during the Warhol eraat the “Silver Factory,” from 1966 onwards, and Gerard and I becamevery good friends indeed. In fact, when I moved out of New York City finally,Gerard took over my apartment! The Velvets were just the “house band”at the Factory, and their records, at the time, didn’t sell, and no one thoughtthey were an important band. But for those of us on the scene, The Velvets wereone of the few bands that mattered.

No, because we were so close to NYC that it didn’tmatter. Futhermore, after we cut the single, we shopped it to every singlelabel and producer in NYC in 1972, including people like Clive Davis and DannyFields, and in person, by going right to the offices of the record companies,meeting with the A&R men, and trying to get a record deal. But we gotturned down flat everytime, which led to the eventual dissolution of the band.Looking back, I feel very strongly that we were just about four or five yearsahead of our time; if we had been coming up during the Punk era, we probablywould have gotten a label deal. But we predated punk, and that made all thedifference.

You say on the sleeve to yourrecord, “Smash Hits”, that you were living in a run down apartment inNJ. Was it easy to find these places back then?

Are youkidding? Life was very, very cheap, unlike now. You could actually rent anapartment in Manhattan on the lower east side for about $50 -100 per month!!Imagine that now. Impossible!

You were also living in London in 1968. Did that influence your music in anyway?

Naturally, as I went out to as many clubs aspossible, and saw The Who, The Stones, The Kinks, a forgotten but great bandnamed Elmer Gantry’s Velvet Opera, The Small Faces, and numerous other bands. Iwent back in 1971, and met The Pink Fairies, a great hard rock band, and touredwith them making a film entitled “1964,” which unfortuantely is nowlost (like much of my film work, I’m afraid). I love their use of feedback, andtheir onstage style; they were a great band.

How did you find people to playwith who were into the same music?

Friends, especially Michael Downey, my partner inthe band, who were into the same music.

When did you start the band?

Spring, 1970; we just rented the amps, guitars anddrums and went at it. 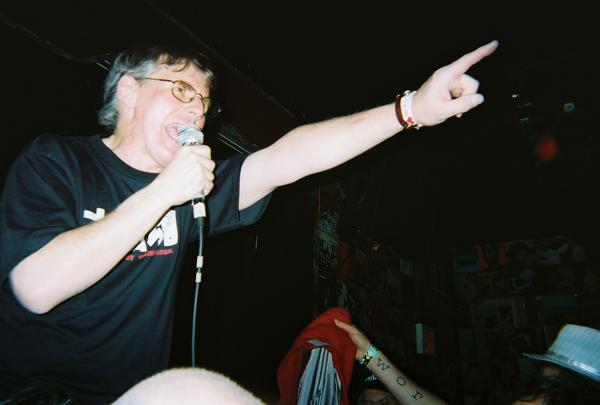 How old were you?

I was 20 when I formed the band with Michael; wewere the nucleus of the band, and still are.

When you first started out is ittrue you couldn’t play a note?

Where did you rehearse?

In our apartment at 42 Remsen Ave in New Brunswick;I was the superintendent of the place, and Michael and I lived on the topfloor; we set up the equipment in my bedroom, and jammed 24⁄7.

How come you decided to destroy15 television sets and a bunch of mirrors on your first show?

As a protest against the Vietnam War, and the wayit was being presented on television.

The TV sets were donated free; we spent the summercollecting them. Cost nothing.

There was also a motorcycleinvolved…

Yes, we drove a motorcycle down the main aisle ofthe concert hall to the stage, and started the show by smashing a record playerplaying Gershwin’s An American in Paris.

How did you get this show?

We just found a room at the university that wouldtake us, and set it up. It was free to all.

It must have been a pretty remarkable thing to. What were peoples reactions?

The reaction was insane, as you can hear onthe record. People went nuts in the audience, and yet, despite the incredibleenergy in the room, the whole thing was very positive, and had a good vibethroughout. People saw this as art, as a performance piece. That’s what it was.

To me it seems pretty bold to play basically two chord punk, destroytelevision sets as a protest against the Vietnam War in 1970. did you feel likeyou were cutting edge or just having fun?

I knew, frankly, that we were cutting edge, andthat the concert would be a total assault on the senses. I also thought, as didMichael, that our music was the next direction of pop, and we turned out to beright. The concert was a statement, in all honesty, of our feelings of angerand frustration with the unending Vietnam War, and the enslavement to the BoobTube that most Americans were addicted to.

Were people very politically active in those days?

How would you describe those times? Do you think people were more openminded with these things?

Absolutely, though right now, with Barack Obama andthe recession, I think that we may be entering a more positive phase in thenext eight years or so. People in the 1960s in the New York metro area werevery interested in all kinds of culture.

Did you get more shows after this? How often did you play live?

We did a bunch of gigs after this one, includingone that was nothing but feedback. We performed pretty regularly from 1970 to1972.

You mention a few times that your gigs were more performance pieces withfeedback and smashed tv sets. Was that something you intentionally incorporatedinto the band being into films…

Yes, rock and roll and film certainly wenttogether; two of the 60s most dynamic art forms.

How did you feel when punk music came a long a few years later?

Like I had been right all along. Punk was thefuture of rock and roll.

Tell me abot the 7” you putout? Was it easy to do?

Yes, it was. Jeff Travers was a superb engineer,and we cut the single in two days. The whole thing cost maybe $100.

What was your reaction when Miriam from Norton records wanted to re-releaseit?

How do you feel about playingthis stuff 35 years later?

Ecstatic; much of the stuff is new, and we’d loveto play more gigs.

What have you been doing sincethe demise of the band?

I made a huge batch of films, wrote many books andarticles on film, and for many years, music was just something from my past.But now, we’re back, so watch out!